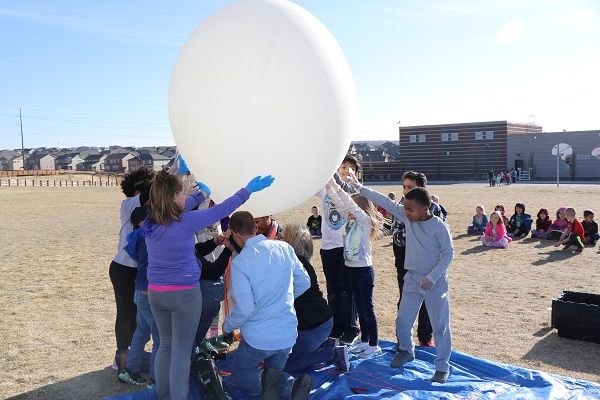 'Do You Want to Go to Space?': Mountain Vista Balloon Launch Aligns with STEM Movement at CCSD

The crowd of students assembled on the lawn at Mountain Vista Elementary School on Dec. 14 didn't hesitate to answer the ambitious question posed by one of their teachers.

Collectively, the fifth-graders screamed their assent when asked, 'Do you want to go to space?'

The group's enthusiasm wasn't dimmed by the fact that the journey wouldn't be firsthand. Instead, the crowd would take the voyage vicariously, thanks to a near-space weather balloon launched as part of school-wide and district-wide curriculum rooted in Science, Technology, Engineering and Math (STEM).

The Mountain Vista crowd of fifth-graders and teachers gathered on a sunny December morning to send up a balloon toting a controlled experiment designed entirely by students. They sent up a water balloon, as well as a sample of slime. The students wanted to see how the extreme temperature change and trace degrees of radiation in the upper atmosphere would affect the objects included in the "payload."

"They want to see if those factors will do anything to the slime that they made," said Jon Pierce, Elementary STEM and Innovation Coordinator for the Cherry Creek School District. "They kept a sample from the same batch that they're sending up, and they'll run comparisons and analysis when they get the sample from the balloon back."

It's hardly the first time that elementary school student in CCSD have had the opportunity to conduct such an experiment. Over the course of four years, students have launched more than 100 weather balloon experiments at schools across the district. Funded in part from grants from the Cherry Creek Schools Foundation, the experiments have become a valuable component of elementary school students' exposure to the core tenets of STEM.

Since Pierce and his peers in the district's STEM and Innovation departments started the weather balloon launches, the experiments have developed and advanced. Students now have the opportunity to conduct advanced, refined experiments that carry immersive lessons about how the natural world works. Combined with exposure to the engineering and aviation principles behind the balloons themselves, these experiments offer students a comprehensive and innovative entrance into the world of STEM.

"When we first started out, a common experiment was sending a marshmallow up to see if it would explode," Pierce said. "Today, we have schools that are sending up petri dishes to try to capture bacteria from above the jet stream to see if it's the same as the bacteria from their playground. It's an exponential difference."

Students are now able to track data in real time as their balloons ascend into near space. With high-tech weather sensors and cameras, students can get a vivid picture of a given balloon's flight.

"We're going to be able to see where the balloon went and what happened to it," said Jack Randels, a 10-year-old fifth-grader who assisted in launching the balloon at Mountain Vista on Dec. 14. "This makes me even more interested in science."

When asked if he wanted to continue studying STEM subjects in middle school and beyond, Randels responded, "Of course."

Instilling that kind of enthusiasm in the scientific process is one of the major goals behind the weather balloon launches. From designing experiments to releasing the balloon to recovering the payload after it's fallen back to earth, the entire process offers a vivid, tactile view of the natural world.

"We've seen exponential growth – we're doing launches at over 32 elementary schools this year. That's growth like you wouldn't believe," Pierce said. "Thank you to our entire school district for seeing the value of these experiments and seeing what they can give to kids. They propel learning to the next level."