CCSD family plays Pickleball for a cause 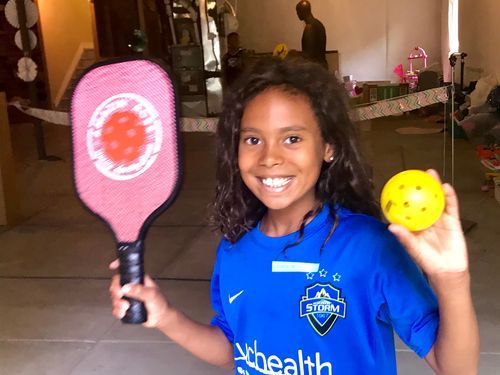 Sometimes the smallest and simplest ideas can make the biggest difference.

For a local Cherry Creek School District family, a casual summer activity was a perfect and simple idea that made a big difference in raising money for families in need of internet access to stay connected to their education.

Erin Williams, a new board member for the Cherry Creek Schools Foundation and mother of two children in CCSD, decided to take what started as a way to stay active during quarantine and utilize it as a fun way to give back to families in CCSD.

“When COVID-19 hit, we wanted to stay active as a family, so my 8-year-old daughter and I used crate paper, tape, string, an old lamp stand and a box to make a mini Pickleball court in our basement,” Williams said. “Our kids are 11 and 8 right now; perfect ages to encourage empathy.” When they found out other students -- possibly at their school -- wouldn’t have access to the internet they were all-in for a family “fun”draiser on the Pickleball court.”

Each participant in their family paid five dollars per game for every loss, and when the tournament ended the money was donated to the Cherry Creek Schools Foundation’s Internet Access Campaign.

“My daughter won so many games, she ended up giving above and beyond her commitment.” Williams said.

After learning about this creative idea, many other friends of the family wanted to join and play in their Pickleball tournament; however, with physical distancing still in place they encouraged others to come up with their own family fundraisers or tournaments involving a net and a pledge to donate to the campaign.

Along with creating awareness for the Foundation’s internet campaign, it was a great lesson for her kids to be more active in helping the community.

“It was important to get the kids involved in helping their peers,” Williams said. “We gave a flat family donation, but the money from the tournament meant even more to us because the kids saw the power in helping.

From start to finish the family was involved in making the tournament a fun and creative event, which included waivers, an official sign, and a competitive atmosphere.

“Our son is so competitive he wanted to keep playing and giving,” Williams said. “We told him we’ll keep our family “fun”draiser going but will rotate selecting a charity of their choice.” They recently saw a story on the news about a family without internet and said “We gave to that!” Although the story concerned a family in another state, our kids absolutely helped other families and that filled our hearts.